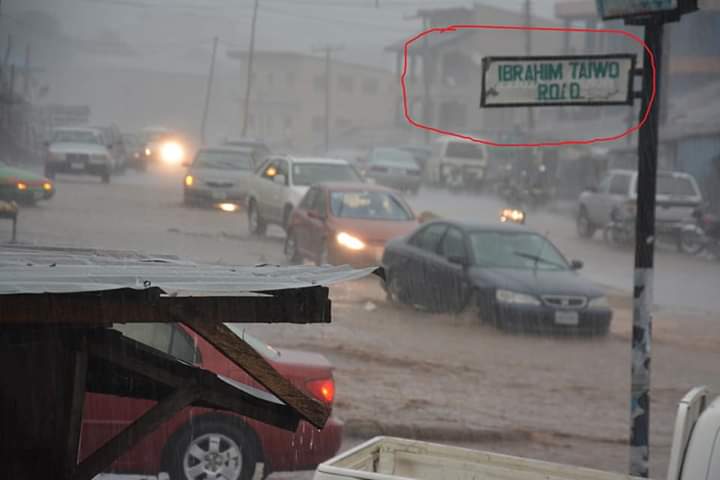 Saturday evening was a time Kwara residents will never forget, as it came down storming across the state.

Ilorin residents witnessed a rare situation which hasn’t occured in a long time, as the storm tore down buildings, objects, sign boards, and also brought down walls and electricity poles.
It resulted in severe fload, which was also accounted to have led to loss of life in different regions which includes the carrying away of a child around Odota region, in Ilorin.

The downpour which lasted for more than 4 hours, has put the whole state capital in darkness as a result of many electricity poles that collapsed. Major areas in the state capital had a total state of darkness throughout Sunday, as the Power sector incharge were going across, trying to fix various situations across the affected regions.

The fire fighters were also on their toes, attending to areas involved, rendering support and resque.

Mostly affected areas are Okekere, Oju Ekun, Okelele among other areas in the Ilorin West local government area, while many communities in the four local governments in the Kwara Central senatorial district, such as Ilorin East, Ilorin South and Asa, were not left out.

It was gathered that rooftops of many houses in all the affected areas were destroyed, while many victims of the destruction have been rendered homeless, especially in such areas as Gaa Akanbi, Murtala Mohammed way, Ibrahim Taiwo road, Agbabiaka, among other areas.

There was a lot of laments, pertaining to the damage of household property, like upholstery, electronic sets and cooking materials.

The Governor of Kwara State, Mallam Abdulrahman Abdulrazaq has also commiserated with families whose dwellings were affected in Saturday night’s heavy rainstorm in different parts of the state.

I am saddened by the havoc wreaked on various households in Ilorin, the state capital, and indeed elsewhere across the state by yesterday’s heavy rain storm. I commiserate with those affected by it.

Informed by NIMET prediction of the incoming storm, I had visited NEMA and other Federal Agencies last week to seek special relief for Kwara.

On our part, we are immediately setting up a special disaster response team to collate data of areas affected and determine how the state government can offer support based on available resources.

Also, the impact of the storm on electric poles around the state is a huge concern to our administration; therefore, I have directed relevant agencies to quickly fix the poles as soon as possible to ensure restoration of power.